JOLIET, IL — After a five-year endeavor, Phil Soto and his partners are ready to open Bishop’s Hill Winery at Joliet’s only castle along Bridge Street. More than 100 years ago, the castle served as the home for the owner of the old Fred Sehring Brewing Co.

The castle, which was built in 1890, will be used for wine-tastings and small private events. Bishop’s Hill Winery is a few blocks up the street from the Jackson Street Bridge at the Des Plaines River, and it’s in the St. John’s Neighborhood.

“I tell people looking to come to town, we’re the only castle on the street,” Soto quipped.

The Bishop’s Hill Winery will be open from 4 to 8 p.m. Thursday, 3 to 8 p.m. Friday, noon to 8 p.m. on Saturday and noon to 4 p.m. on Sunday. Soto is also participating in the Joliet Area Restaurant Week which starts April 15 and continues through April 30. He’s offering a 30-percent discount on the deluxe wine testing special, a $20 value for $14.

“You get to try nine different wines. That’s a good deal,” remarked Soto, who is general manager of Bishop’s Hill Winery.

Soto said he has made 10 different wines that are available by glass and by the bottle starting Thursday.

His website for Bishop’s Hill Winery explains the history of the unique Joliet project: “We set our sights on finding the perfect location in the Chicago area that brought together the classic feel of old French and Italian wineries. We were fortunate to find a hidden gem property in Joliet that was the former headquarters for the Joliet Catholic Diocese. A really unique picturesque property on a bluff overlooking the Des Plaines River Valley. The property included a castle-like residence built by a former German Brewmaster. It has been completely restored to its former glory. The castle is now available for wine tastings and events.”

Joliet Patch asked Soto whether he had a favorite wine recommendation.

Soto said he will be offering food trays and desserts. He expects his customer base will be from the Joliet region as well as Chicago and the suburbs.

“I’ve had three inquiries for bridal showers,” Soto said Wednesday. “We can seat about 70 people.” 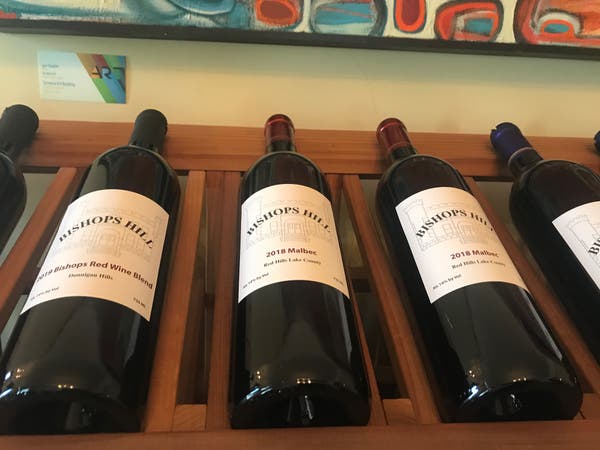 The Bishop’s Hill Winery at 310 Bridge St. in Joliet proclaims: “We were fortunate to find a hidden gem property in Joliet that was the former headquarters for the Joliet Catholic Diocese.” John Ferak/Patch

His vision? To see Bishop’s Hill Winery become a prominent tourism destination for the city of Joliet.

Right now, when people think of Joliet, the concept of a 19th century winery does not come to mind, but Soto’s hoping he’s about to change that.

While the Joliet region has its share of microbreweries, “wineries are a much smaller family,” he said.

Next month, Soto said he will begin planting grapes on the hillside of the property. The process of growing grapes and making them into wine often takes several years, however.

When the wine processing building and large indoor event space down below the hillside is finished, Soto said he will be able to accommodate twice as many guests on his property.

Joliet Patch asked Soto if he had any last comments he wanted to make now that his long-awaited, much anticipated grand opening has arrived.

Soto strongly urges people to go to the website to make their reservations. To learn more about his wines, visit his website here.