A year ago: Death and birth at hospital hit by Beirut blast

BEIRUT — Emmanuelle Khnaisser had been in labor all day, and now it was in the last stages. Her baby — her first — was crowning.

Five floors below, Jessica Bezdjian was just coming in through the entrance of Beirut’s St. George Hospital. She was an hour early for her 12-hour shift as a nurse in the psychiatric ward.

In every room on every floor in a single instant, windows burst. Doors flew off their hinges, ceilings collapsed, and equipment toppled. A wave of dust and pulverized glass surged through the wards and halls. In the darkness and chaos came the screams of bloodied patients, doctors and nurses.

One of Lebanon’s most prestigious and oldest medical centers, St. George stands overlooking the Mediterranean coast about 900 yards from Beirut’s port. On that day a year ago, hundreds of tons of ammonium nitrate improperly stored at a port warehouse blew up in one of the largest non-nuclear explosions in history.

The Aug. 4, 2020 blast tore through the Lebanese capital at 6:07 p.m., destroying entire neighborhoods and killing at least 214 people, including 22 at St. George Hospital.

A year later, every moment of that day remains engrained in the minds of those who lived through it. Many still struggle with the physical and psychological trauma. Some wrestle with the inexplicable loss of a loved one, some try to grasp what it means to have survived.

“It was the happiest moment in my life and the ugliest one at the same time,” said Edmond Khnaisser, Emmanuelle’s husband.

Emmanuelle’s water broke around 5 that morning. She was going into labor two weeks early. She and Edmond rushed to the hospital and were admitted to a room on the 5th floor.

Emmanuelle, a 29-year-old lawyer, was soon joined by her parents and sister, as well as her husband’s mother and sister.

Together, they waited for baby George — as they already knew they would name him — to come into the world.

On the northern outskirts of Beirut, Chouchan Yeghiyan woke up her youngest daughter, Jessica, at 4 p.m. to get ready. Jessica usually slept for much of the day since she was working overnight shifts at St. George. The 22-year-old loved her work and was saving money to pursue a master’s degree.

She had a meal and a shower. Once her older sister Rosaline got home around 5:30 p.m., Jessica went downstairs and took the car.

She waved goodbye to her father, George Bezdjian, who was standing on the balcony as she drove off.

“I wish I didn’t wake her up that day,” her mother said, tears running down her face.

Chouchan Yeghiyan weeps in front of a picture of her daughter during an interview at her home on July 12, 2021. (Credit: Bilal Hussein/AP.)

Around 5:45 p.m., the baby’s head could be seen. Emmanuelle was wheeled into the operating room. Just as Edmond was asking if he could step in, the blast hit.

Ceiling tiles and window frames collapsed onto Emmanuelle, and glass showered her from the waist down. Her entire bed was jolted nearly a meter (yard) out of place. One doctor was thrown under the bed, another was hit by debris. Their blue and white uniforms were splattered with blood. The machine registering George’s heartbeat broke.

“I was in a state of shock. We had no idea what had happened,” Emmanuelle said.

Videos from Edmond’s cellphone document the panic. In one video, he can be heard screaming, “Where is my wife? Stay where you are. Oh, Virgin Mary.”

Bleeding from a mean gash on his leg, he cleared the debris off Emmanuelle and started picking the glass from her body.

The baby had pushed back inside her, and the delivery had to start from scratch. The doctors moved her bed into the emergency exit corridor, where there was less damage.

She was disoriented and didn’t know if her baby was alive. A doctor brought out a monitor and placed it on her stomach. After a few, tense moments, they heard his heartbeat.

“I felt that there is a reason I should live for. I have to do all I can because I have a big responsibility for George to come to this life,” Emmanuelle recalled. She thought about her parents, her husbands’ parents, and “I gathered all my strength and removed all negative ideas and concentrated.”

As she pushed, Emmanuelle could hear people weeping and ambulance sirens blaring. Distraught people rushed by her in and out of the emergency exit, searching for loved ones. As the evening grew dark, the doctors continued the delivery by the lights of their cellphones.

Edmond ran out briefly to look after his mother, who had suffered broken ribs, and Emmanuelle’s father, who had a head injury.

When he returned, the doctor used forceps to pull George out. At 7:18 p.m., the little boy with dark brown hair emerged, 71 minutes after the blast.

“When they put him on my chest, I was feeling very guilty and told him … ‘I’m sorry, my life, that you had to be born this way.’”

In one of Edmond’s videos, a nurse can be heard showing a crying baby George to Emmanuelle. “He is so beautiful,” the nurse tells her.

Usually when Jessica arrives at work, she sends her mother emojis of kisses or hearts. On this day, at 6:05 p.m., she sent an emoji of an angel. Two minutes later came the horrific boom, earsplitting even at their home 6 kilometers (4 miles) from the port.

When they saw the news about the blast’s extent, Yeghiyan started screaming: “I feel something in my heart. Maybe the girl died.”

Her husband and their eldest daughter rushed out of the house and drove toward St. George, while Yeghiyan stayed behind and frantically tried to call Jessica. She then knocked on the neighbor’s door and asked him to take her to the hospital. When they hit traffic, Yeghiyan jumped out of the car and stopped a man on a motorcycle. She climbed on the back, and he weaved his way through the jammed vehicles toward St. George.

The father and daughter got there first. They were told Jessica was in the emergency ward. They assumed she was there helping the wounded.

They recognized her from her shoes. She was lying on the emergency ward floor, doctors giving her artificial ventilation and pressing on her chest.

Bezdjian saw the gaping wound on his daughter’s neck and her bag, soaked in blood, on the floor next to her.

“I took off my daughter’s shoes and started kissing her feet,” he recalled, his voice shaking. “I asked God, ‘In nine days I will be 60. Take my breath and give it to her.’”

Yeghiyan arrived and saw her daughter’s body. She fainted.

Jessica succumbed to her wounds around the same time George was born.

St. George Hospital was in crisis condition. The damage, from top to bottom, was too much. It had to shut down — for the first time since it was founded in 1878. The stunned staff evacuated patients, carrying them down the stairs on plastic chairs or bedsheets. Patients were lined on the pavement outside while medical staff treated urgently injured people in the open air of a main yard. 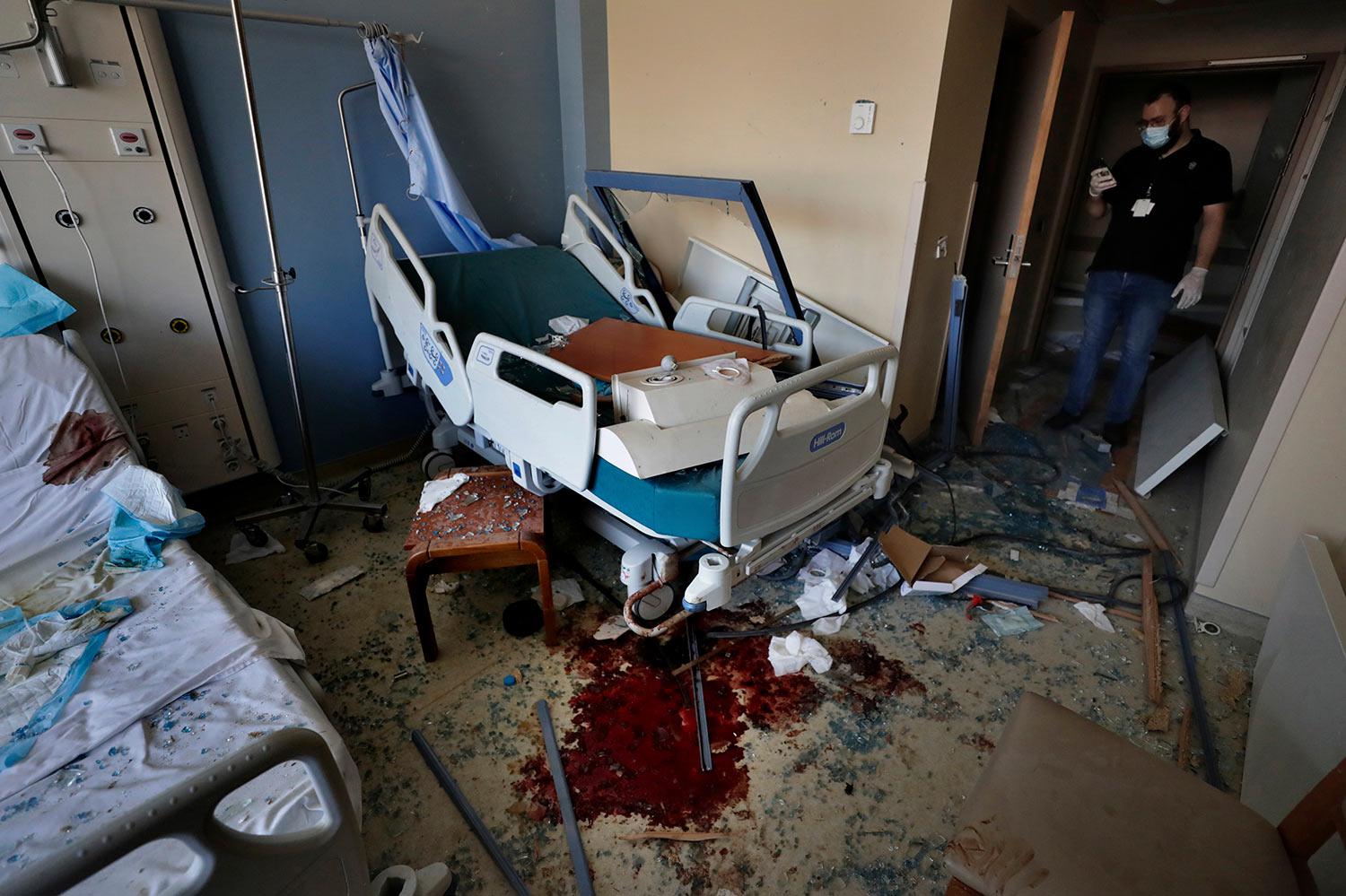 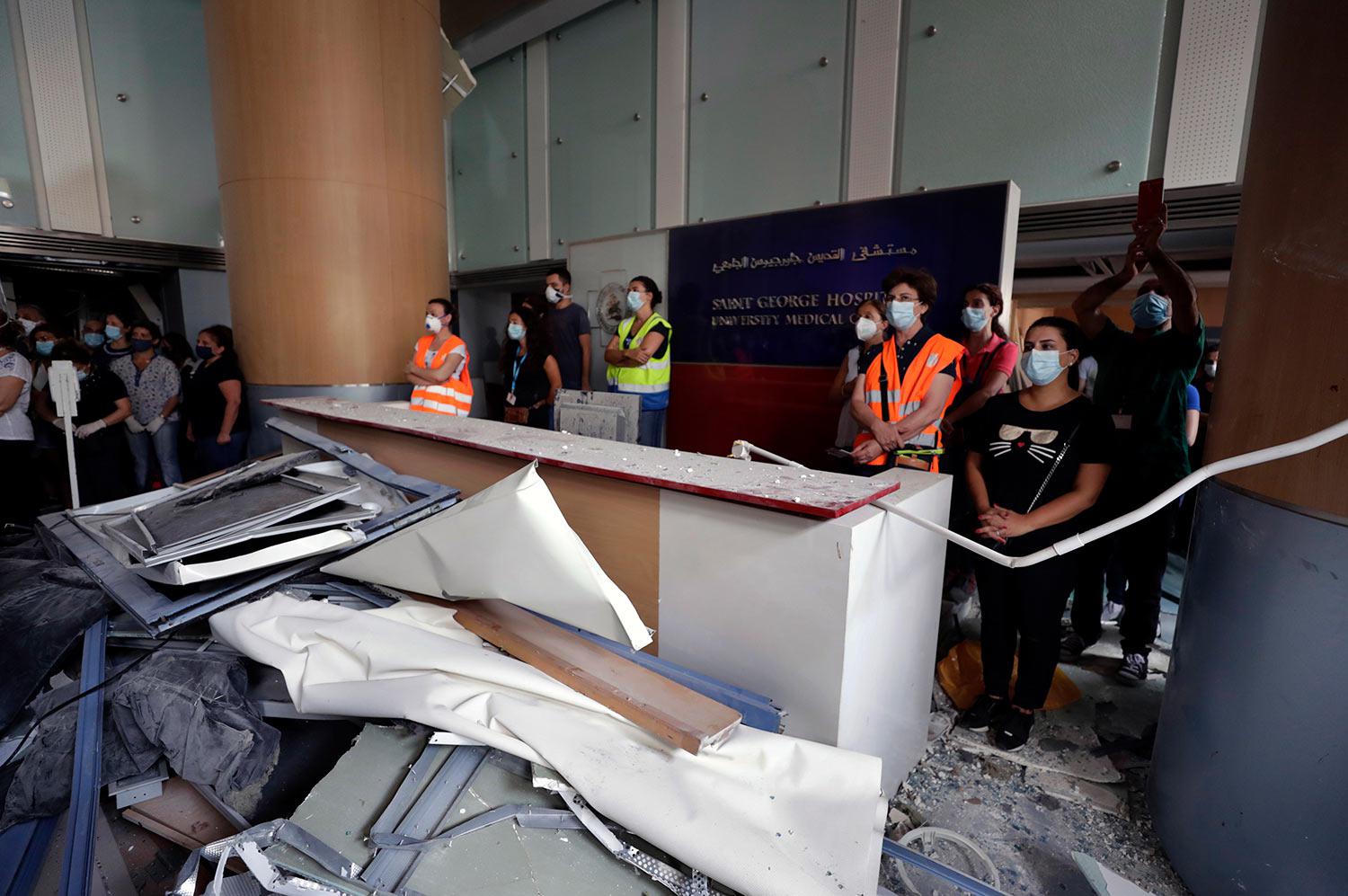 People stand at the main entrance at the hospital a day after the blast. (Credit: Hasan Ammar/AP.) 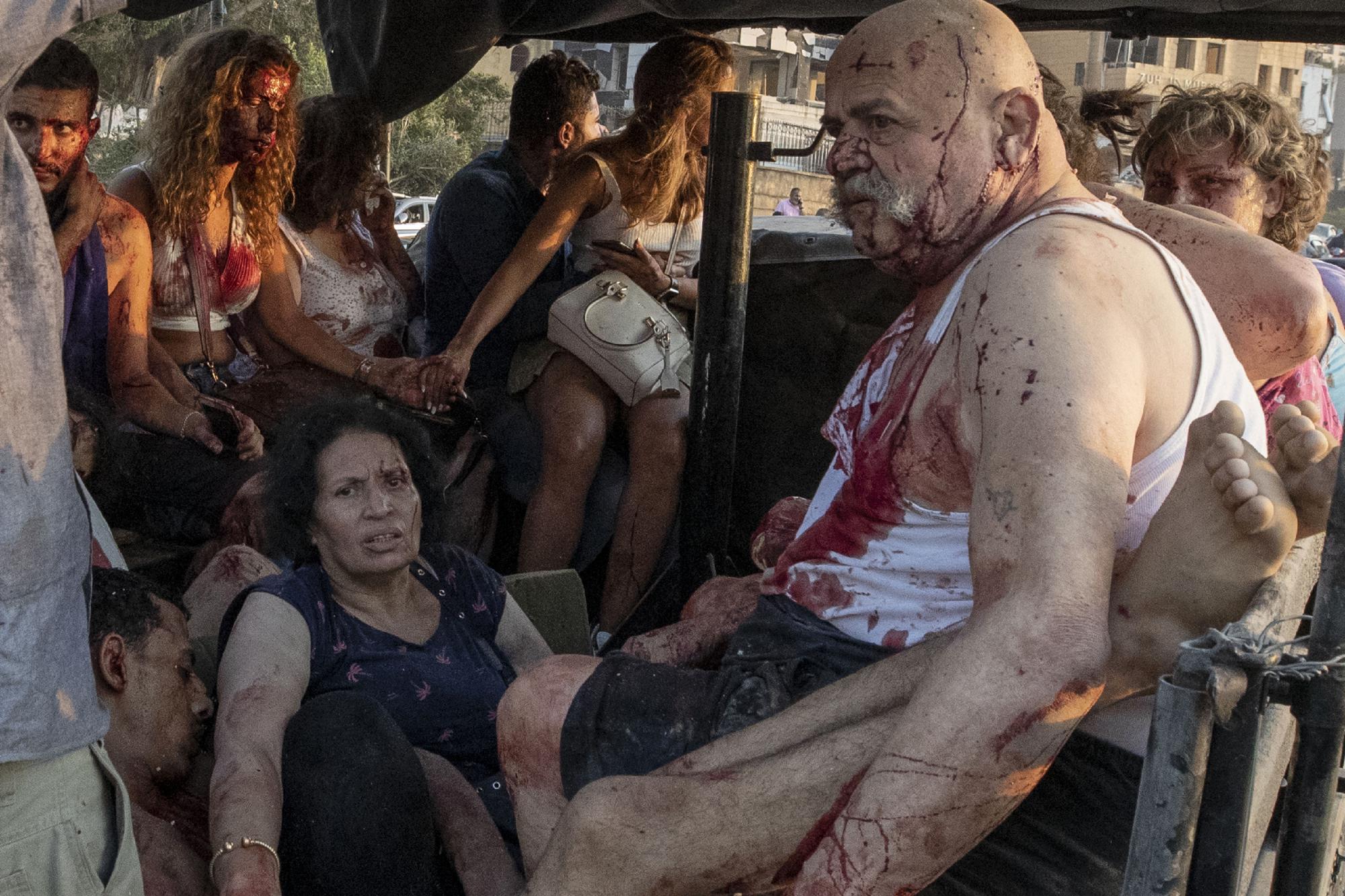 Injured people are evacuated by a military truck after the explosion. (Credit: Hassan Ammar/AP.)

At the same time, ambulances were rushing in with wounded from around the city. Dr. Alexandre Nehme, the hospital’s chief medical officer, recalls how he had to tell them: “We don’t exist anymore.”

Back on the 5th floor, Edmond held his son tightly, scared of losing him amid the chaos. Doctors told the couple they needed to get George to another hospital within four hours.

Emmanuelle was carried down the stairs on a chair, while Edmond messaged every WhatsApp group on his phone asking whoever was closest to pick them up. They walked for a block through debris and broken glass, to where his brother-in-law was waiting in his badly damaged car.

They drove about 5 miles north of Beirut’s city center and reached a hospital. Only after they were admitted did they discover that the needle of the IV drip had broken off in Emmanuelle’s arm, and the epidural was still stuck in her back.

They spent a week at the hospital as Emmanuelle was treated for an infection. Then finally they brought their baby home.

Jessica’s family headed home shortly before midnight on Aug. 4. The next day, the hospital called. They asked Bezdjian to come collect his daughter’s body because there was no electricity in the morgue.

They waited for four days until relatives came from abroad to hold the funeral. It had the trappings of a wedding, as sometimes customary in Lebanon for those who die young. The mourners dressed in white. The Armenian Catholic priest gave a prayer used at weddings. 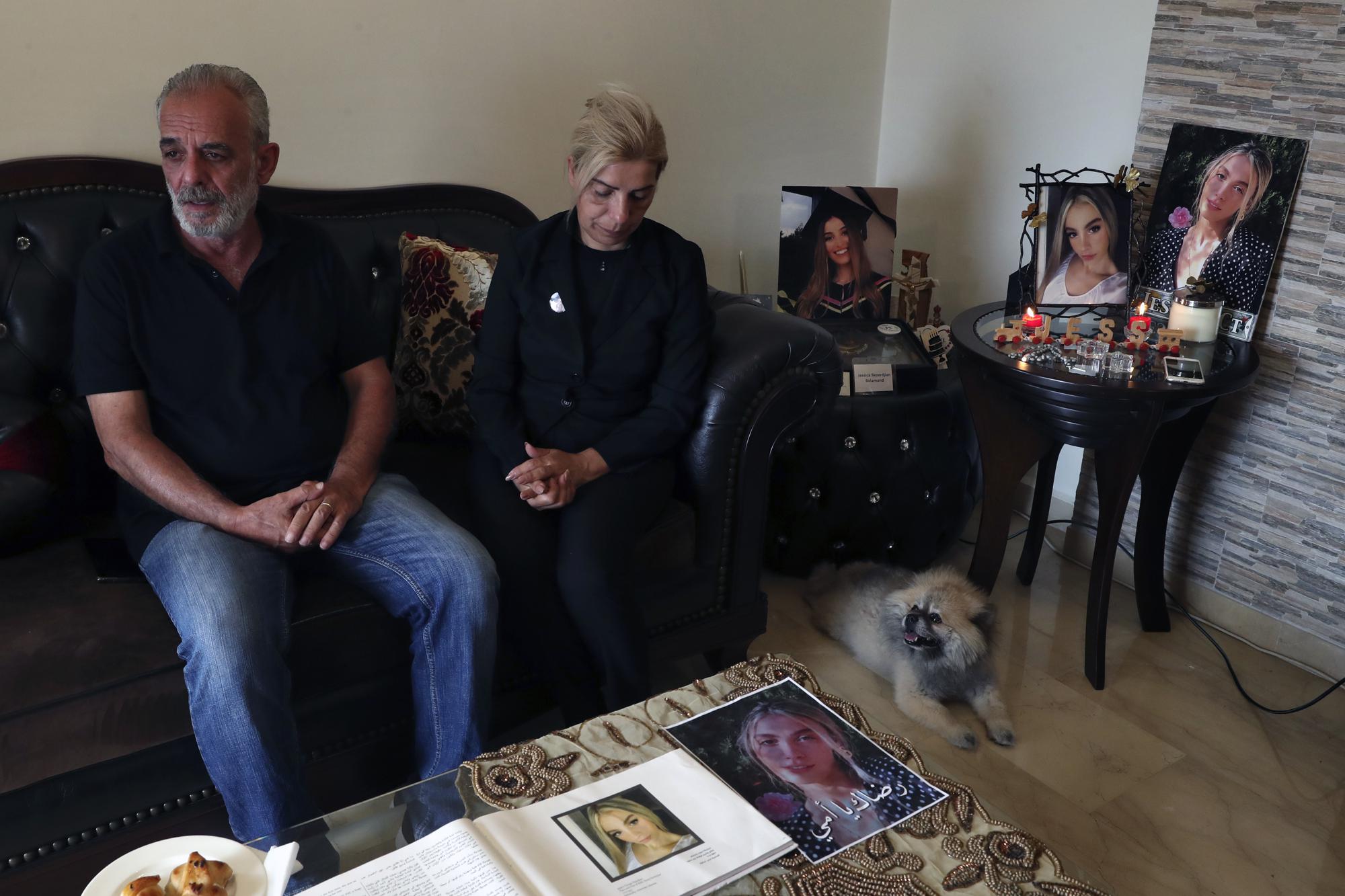 George Bezdjian and Chouchan Yeghiyan, the parents of Jessica Bezdjian, speak as they sit next to her pet dog Foxy and pictures of her. (Credit: Bilal Hussein/AP.)

“I thank God that our daughter died in one piece and we were able to bury her,” Bezdjian said in their apartment, where several photos of Jessica hang, in a north Beirut suburb. Other people had to bury pieces of their loved ones’ bodies.

Three days after the funeral, the family took Jessica’s dog, Foxy, a Pomeranian, to the cemetery where she was buried. They released the dog and watched from a distance as he ran from one grave to another, then jumped on Jessica’s and started yowling.

Then in November, on what would have been Jessica’s 23rd birthday, the family went to the cemetery and marked the occasion next to her grave.

In their Beirut apartment on a recent day, Emmanuelle and Edmond sat watching George as he played in his room.

They will celebrate his first birthday a few days after Aug. 4, out of respect for the many people who lost their lives or were hurt on that day a year ago.

Edmond, a dual Lebanese-Canadian citizen who was born in Edmonton, Alberta, said that despite the extreme hardship in Lebanon right now, the couple have no intention of leaving. They hope to give George a brother or sister at some point.

Emmanuelle said she was told that babies are aware of everything that happens around them. One day, she said, she will tell George about his birth in the blast.

“I will tell him how his birth was a ray of light amid all the darkness.” 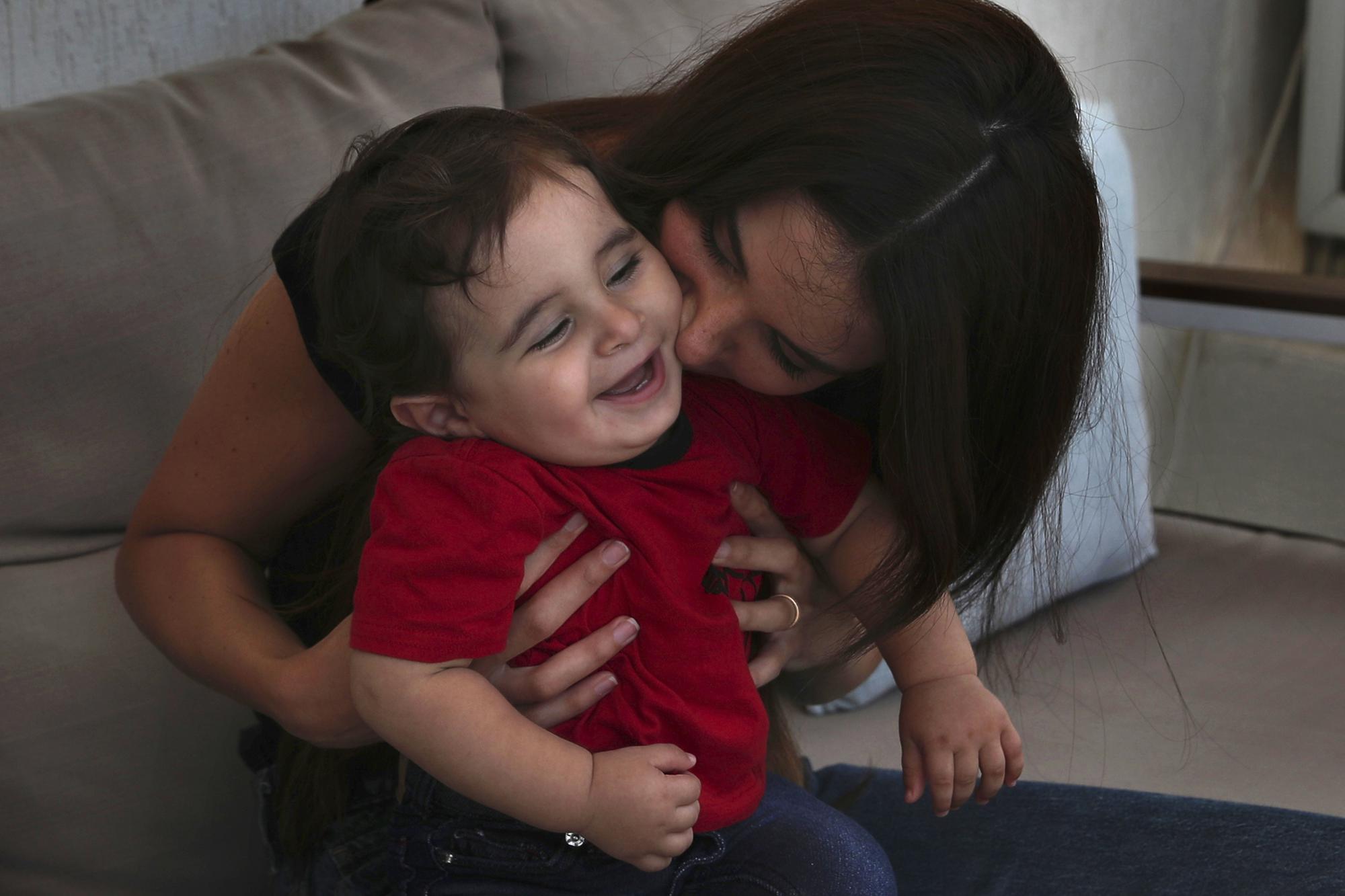 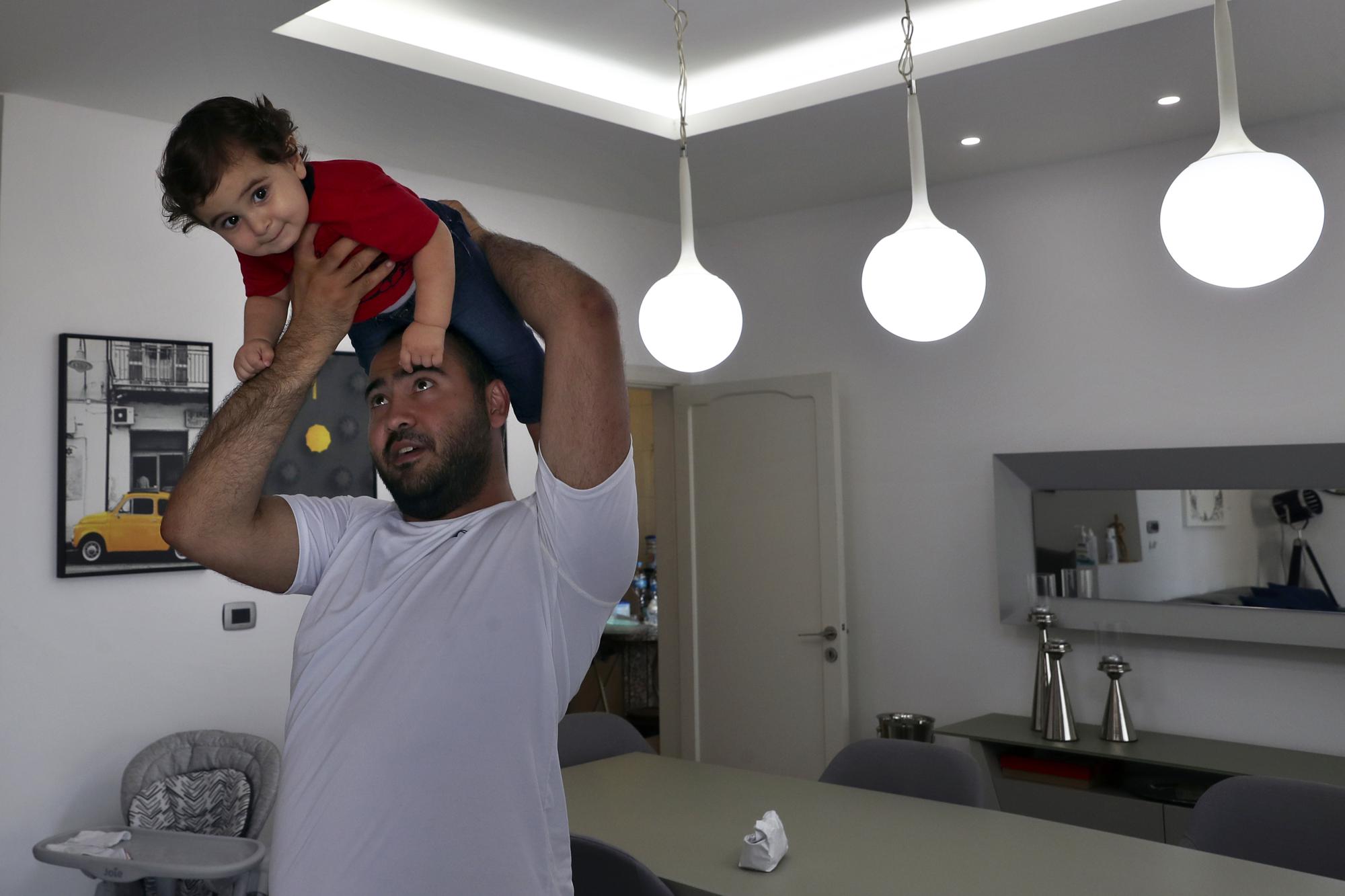 Edmond Khnaisser holds up his son, one-year-old Georges, at his house in the town of Jal el-Dib, north of Beirut, Lebanon, Tuesday, July 10, 2021. (Credit: Bilal Hussein/AP.)

‘Patron saint of the internet’ featured in unique stained-glass window