As The Voice’s Season 22 Blind Auditions continued Monday night, Camila Cabello, Blake Shelton, Gwen Stefani and John Legend recruited a couple of beauty queens who definitely aced the talent portion of this competition, a Cuban-American Nick Nelson whose vocals were a real, ahem, heartstopper, and a fashionista who made some dramatic alterations to Mandy Moore’s 1999 pop hit. And if you keep reading… Oh, I see, you’ve already skipped down. As you were, then. Let’s recap.

Kique (Team Gwen), “Beautiful Girls” — Grade: B | This young reptile aficionado, who struggled as bi guy in an all-boys Catholic high school, has a lovely, soulful voice, an especially memorable lower register and a face that’s made for the cover of Seventeen. But throughout most of his performance, he looked scared to death. Where was the playful personality that he revealed after he sang when he was singing?

Hillary Torchiana (Team Blake), “Easy on Me” — Grade: B- | Rising from the ashes of a house fire that claimed the lives of her beloved cat and dog, this soon-to-be-wed 34-year-old earned a single chair turn with an Adele cover that was probably technically proficient — inventive, even, at times. There was just something whiny to her tone that made her seem like a likely casualty of the Battles.

The Marilynds (Team Legend), “What If I Never Get Over You” — Grade: B+ | These sisters, besties and onetime Miss Marylands — with a duo name that we all know I’m destined to misspell 100 times — delivered an absolutely gorgeous Lady A cover. Sweet, if not quite Girl Named Tom-caliber, harmonies and really distinct individual voices. The only thing that worked against the sibs is the sorta insincere vibe that’s often associated with beauty queens.

SOLsong (Team Legend), “Turning Tables” — Grade: B+ | We only got to hear a teensy bit of SOLsong’s audition, but in that brief snippet, he proved that not only does he have a voice unlike anyone on his coach’s team, he has a voice unlike anyone in the competition this season. Beautiful, controlled, emotional — and rich enough to count as dessert. 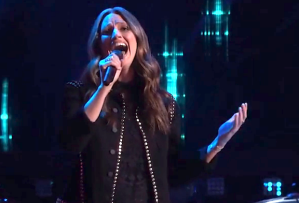 Kara McKee (Team Legend), “Woodstock” — Grade: C | I feel bad giving Kara a C when we were only offered the smallest of samples of her tryout (especially after raving about SOLsong, whose name autocorrect is gonna love). She just seemed… wobbly. Maybe it was brilliant and it was just vibrato that I was hearing. She didn’t leave me convinced, though.

Zach Newbould (Team Camila), “Use Somebody” — Grade: A- | This 19-year-old, whose dad was eager for him to audition so that he could have a beer with Blake, would’ve gotten a chair turn from me after his first notes; they sounded like they’d already been mixed for radio, they were so spot on. As the two-chair turn continued, he demonstrated a solid rock voice. In the long run, though, I hope he’ll be directed more into the emotional-ballad lane, which sounds like it could be his sweet spot.

Lana Love (Team Legend), “Candy” — Grade: A | Holy crap! How did this 30-year-old only get one chair turn with her stunning — seriously stunning — and creative reinvention of Mandy Moore’s way-before-This Is Us hit. Her voice was pristine and powerful, she looked totally at-home on stage, and what even was that high note that she hit toward the end? Insanely good. 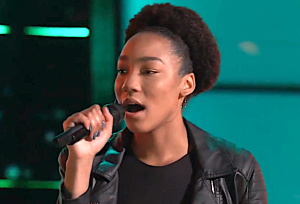 Daysia (Team Gwen), “Crazy” — Grade: A- | The lighting director could’ve taken a coffee break when this 17-year-old was on; she was that radiant, despite having lost her mom only five years earlier. There might have been a little bit of uncertainty to her performance — nerves maybe? — but it didn’t detract from the fact that the two-chair turn’s voice was flat-out lovely and polished to the nth.

Ansley Burns (Team Blake), “Unchained Melody” — Grade: C | This 15-year-old, whose kid brother can pass the driver’s test that she can’t (dang it!), clearly has some talent, impressive range and some oomph to her vocals. But she’s like a stew that maybe needs to cook on the stove for a while longer; she’s not quite ready to be served up yet. Kind of a waste that Blake used his Block on his missus to ensure that he could recruit Ansley. 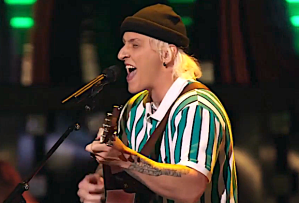 bodie (Team Blake), “You Found Me” — Grade: B+ | This tatted-up 29-year-old father of three, who used music to deal with his alopecia, managed to continue on with his Fray cover even while Blake was yelling at John. (C’mon, guys!) And for bodie’s efforts, he earned a four-chair turn. Solid voice — and I love that he might be bringing some alt-rock to the show — but kinda one-note. Still, Blake told him — and I think he’s probably right — “You have what it takes to make it to the finale of The Voice.”

Who made you turn up the volume to listen a little more closely Monday? Vote in the poll below, then hit the comments with your reviews.