LENOX — Meredith Goldstein, an advice columnist and entertainment writer for The Boston Globe, has taken another foray into fiction following the release of her 2018 memoir “Can’t Help Myself.” Her newest novel, “Things That Grow” (Houghton Mifflin Harcourt, 2021), was released March 9th and is firmly planted in Massachusetts — literally spanning the state from Stockbridge to Boston (if you’ll indulge a quick James Taylor reference).

Goldstein tells her story, aimed at YA readers, from the perspective of Lori, who, following the sudden death of her Grandma Sheryl, with whom she lives, travels to different gardens to scatter her grandmother’s ashes (as per a handwritten request found after Grandma Sheryl’s death).

Lori, her uncle Seth, and her best friend Chris begrudgingly travel to The Berkshires, where some of the book’s pivotal scenes are set. In a recent phone interview, Goldstein spoke to there being “something hilarious about this family who goes on a tour of The Mount — surrounded by all this beauty, all this history — and are not quite clued in the way they should be because they have other things on their minds.” (I, for one, understand exactly what she is talking about, as does any parent who has attempted such an outing with kids.) There is a level of distraction and well-played humor throughout, that is refreshingly honest and accurate.

Goldstein, whose writing of this particular story was largely influenced by the death of her own mother, speaks to universal truths: love, loss, and being displaced — all while coming of age. While she’s been compared to the fictional Carrie Bradshaw of “Sex and the City,” and the very real Cheryl Strayed, these comparisons don’t quite resonate with Goldstein. “Well, I’m not exactly running around the city in high heels,” she said, “and [after my mom died] I didn’t go hiking; I was really just sad … and watching a lot of TV.” Goldstein said her greatest sadness surrounding the book is that she never got to take her own mother, an ardent lover of all things that grow, to The Mount, which she would have loved. So Goldstein sent her characters on a road trip there instead. She calls it “a love letter to the beauty that surrounds us, that I really could not have cared less about before the pandemic.”

As a fitting celebration of The Mount, Goldstein and Marge Cox — the real-life tour guide on whom one of Goldstein’s characters is based — will participate in a conversation about art imitating life, how The Mount inspires writers from all over, and the facts and fictions in “Things That Grow.” Details of this event, slated for Thursday, March 25 at 7 p.m, are available here.

Hannah Van Sickle: As if writing a novel were not challenging enough, what does it take to write from the POV of a grief stricken, rising high school senior?

Meredith Goldstein: I think we all have that voice inside of us that doesn’t go away, that screams the things we say politely out loud once we hit a certain age. I still hear that primal scream frequently. I once asked Gayle Forman (another YA author) why there are so many YA books about teenagers dealing with these massive things like death, and her take was that it’s sort of like your teenage self gets to react to all the scary things you are dealing with as an adult — even though you have learned to cope better, and have more maturity and life experience. A 17-year-old’s inner thought process is not so dissimilar to mine, so writing from that POV becomes therapeutic.

It was a lot of fun to write this character because she is not like me — there are moments where she is like me — but she is more bold and worldly than I would have been at that age (she has access to the internet, for instance). I do think we have these voices inside us our whole lives, things we might have yelled, and rightfully so. Sometimes we should still yell those things.

HVS: The first several chapters ask the reader to sit in a pretty uncomfortable space — one that Seth and Lori are literally occupying. Did you fear alienating your audience with all this cringey talk of death and cremains?

MG: I knew it would be cringey, and I also knew it would be familiar. I wanted to show the different perspectives of that place, similar to what I experienced when my mom died. Experiencing [an Irish Catholic funeral home] as a Jewish person is different. I don’t know much about Judaism, but my aunt is more observant of Judaism and she was upset we were there, following my mother’s wishes. [As I wrote, I thought] this is what the process looks like to someone who has never even been to a wake. Being exposed to someone else’s rituals and figuring out a way to make them your own was important to me — and also to have a character in that scene who does get it [Lori’s friend Chris].

It was also important to me to write that scene with humor; we’ve all had experiences with something that should be 100% somber but ends up in giggles. That, to me, was the mood. Especially when you have characters who haven’t slept! For me, humor was key; it’s a little bit easier to laugh through the discomfort as opposed to just being super depressed and sad. 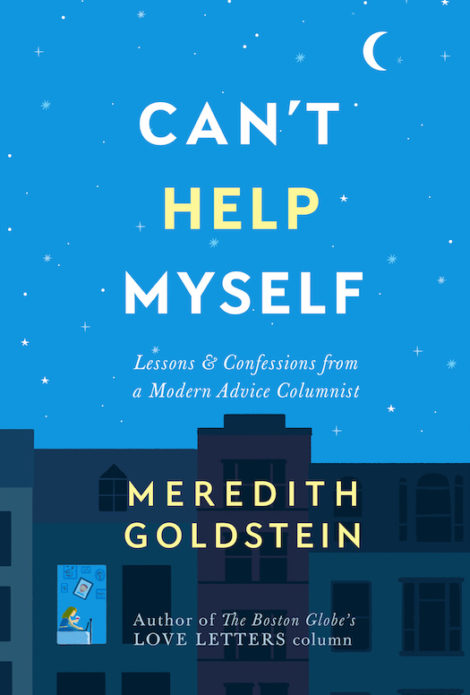 HVS: What role do your own life experiences play in the story you tell?

MG: I think, when you come out of journalism, you observe more than you even know, which means I am constantly influenced by things I see. I’ve noticed the things people relate to most in the fiction I’ve written are things that are very much directly influenced by my real life or something I’ve seen. This book was, in fact, inspired by a visit to a West Roxbury Irish Catholic funeral home, and even sitting there that day I thought: This is the start of something — something my mom would have liked to have read. Of my four books (one memoir and three YA novels), this is the most fictional. [That said], I think I am always a writer who will be influenced by the real life around me. The idea for this book launched because of the cremation experience for my mother, but it became much more of a celebration of where I lived, which was deeply surprising to me.

HVS: Can you talk to me about the power of place in shaping this novel?

MG: I kept trying to squeeze out this book set in Maryland, which is where I grew up. I wanted to do my teenage setting, but that is not what I was celebrating. I wanted a mall like the Natick Mall, but the one in Maryland. I’ve never been an outdoorsy person — I have a ton of allergies! — and I like controlled situations. My mom, especially during her [medical] treatment, was constantly walking around Jamaica Pond and, when I was a kid, she would want to visit specific gardens, or drive to take a picture of a [specific] tree. Once I finally let the book be set in Massachusetts, [it took off].

My mother was not as garden-focused as the grandmother in this book, but I knew her so well that the one way she surprised me in her entire life was after she died and I pulled the will. It just said she wanted to be cremated and placed near things that grow, and I was shocked. Such a simple thing that made me think: Now we have a project. And I kept thinking, what are the beautiful things around me? This book was being finished during the COVID lockdown phase and suddenly, enthusiastically, I wanted to walk the Arnold Arboretum. I think we all developed a real appreciation for space and being outside. One of the major things that changed at the last minute is that, tonally, I was able to truly have these characters appreciate the outdoors.

HVS: Tell me a bit more about The Mount and its place in your book. How did the locale emerge?

MG: The Mount, to me, is the most important setting in the book, for a number of reasons. When I was Googling beautiful gardens in Massachusetts, it kept coming up. I sort of knew it was there, and I knew Tanglewood — my late mother was a musician — so there were certain things in the Berkshires I knew existed. I liked the look of the property and I liked the thought of a house a writer lived in. I asked a friend to go with me — in  2019, during its opening weekend. I really could not find the pin — the most important garden [for the book] — so we drove out [to Lenox]. The minute we got there, it was like magic; as we walked down the path to Wharton’s house, it was lined with bluebells that looked like magic lights. It could not have been more supernaturally beautiful the day we visited. In fact, I remember my friend whispering “Fern Gully” — [in a nod to the fact that] this might as well be an animated Disney cartoon.

We had a tour guide who introduced herself as Marge. I don’t know why we felt so connected to her, but it started to feel like it didn’t matter what question I would ask Marge, there was nothing she wouldn’t know — like perhaps she was Edith Wharton! I was delighted by the whole experience. In that moment, I knew that, not only was The Mount a place where all the characters could have conflict and profess their love, but that I wanted the sort of spiritual guide of this book to be the tour guide at The Mount. I started writing the character and called her Marge as a placeholder, thinking I’d change it later. And while I hardly remembered what the real Marge looked like, her character kept getting bigger and bigger … and I realized I didn’t want to change her name!

HVS: What keeps you engaged in your work, day in and day out?

MG: I’m very lucky that I get to write different kinds of things; I get to do journalism, I get to do podcast writing, and I get to do fiction when I want to. And when I say I “get to,” I mean I don’t have children and I’m single — which is not to say if anyone has those things, they can’t. It’s just that every now and then someone is like, “How did you get that done?” and [it’s because] I’m literally taking no one to hockey practice. It is this weird luxury. There are ups and downs to all situations, but I am someone who has space and bandwidth because it’s just me. Which means I don’t have to wake up at 4 a.m. to write — especially during the pandemic, where parents have every job on the planet, all day, while running their own homeschools.

The constant change keeps me engaged, and stories are fun! I find a lot of writing is thinking. Right now, my favorite thing to do is take a long walk and think about stories; it’s a good release. For me, it’s not the idea problem, it’s the time and energy problem.

Note: Meredith Goldstein writes the Love Letters advice column in the Boston Globe and hosts a podcast with the same name. She lives in Boston with a carnival-size cotton candy machine. Follow her on Twitter @MeredithGoldste.

Bishop on elections: Old should be brought to pasture

Summer prayer gathering to welcome all