The Queen’s coffin has reached Wellington Arch and been placed into the state hearse, which will convey it to Windsor.

Members of the royal family, led by the King, walked behind the gun carriage bearing the Queen’s coffin from Westminster Abbey.

Gun salutes were fired every minute from Hyde Park and Big Ben tolled at one-minute intervals, with military personnel and police lining the route as the procession moved through the capital.

The procession was led by the Royal Canadian Mounted Police and was made up of seven groups, each with its own band.

At Wellington Arch the bearer party lifted the coffin from the state gun carriage and transferred it to the hearse for its final journey to Windsor Castle. 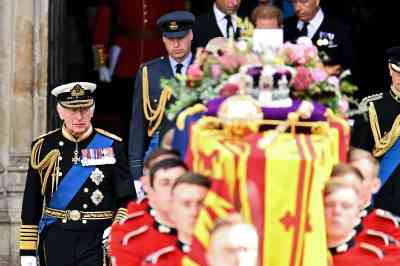 The King joined the procession after the funeral

The hearse is expected

Catholic prayers for Queen Elizabeth II — and the new king

Catholic prayers for Queen Elizabeth II — and the new king