(RNS) — This weekend, Pope Francis published a series of tweets that linked environmental and social crises. This connection embodies the “integral ecology” that is a refrain of his 2015 encyclical “Laudato Si’.”

The publication of “Laudato Si’” was a landmark moment in the fight against climate change. Secular environmentalists were encouraged to see such a prominent global leader devote one of his most powerful tools to their cause. Many American Catholics hoped the encyclical would inspire their bishops to make climate change a priority.

Almost as soon as the document was published, however, the U.S. bishops showed signs that they would largely ignore the pope’s exhortation in their teachings and action.

RELATED: Pope Francis wants every Catholic to have a say. Why haven’t US Catholics heard about it?

Our research shows clearly that U.S. Catholic bishops’ communications collectively diminished the impact of the encyclical on climate change.

Our study focused on ordinary bishops: those who lead a geographic segment of the Catholic Church known as a diocese. We compiled 12,077 columns published by these bishops in the official publications for 171 of the 178 Catholic dioceses in the U.S. from June 2014 — one year prior to “Laudato Si’” — to June 2019.

Pope Francis’ encyclical titled “Laudato Si’ (Be Praised), On the Care of Our Common Home.” Photo by Max Rossi/Reuters

The bishops’ columns are not only a matter of personal viewpoints. Bishops have a duty to share the fullness of faith, including church teaching on climate change, with their diocese. They also oversee buildings and lands, school curricula, investments and advocacy that could be used to help mitigate the climate crisis. 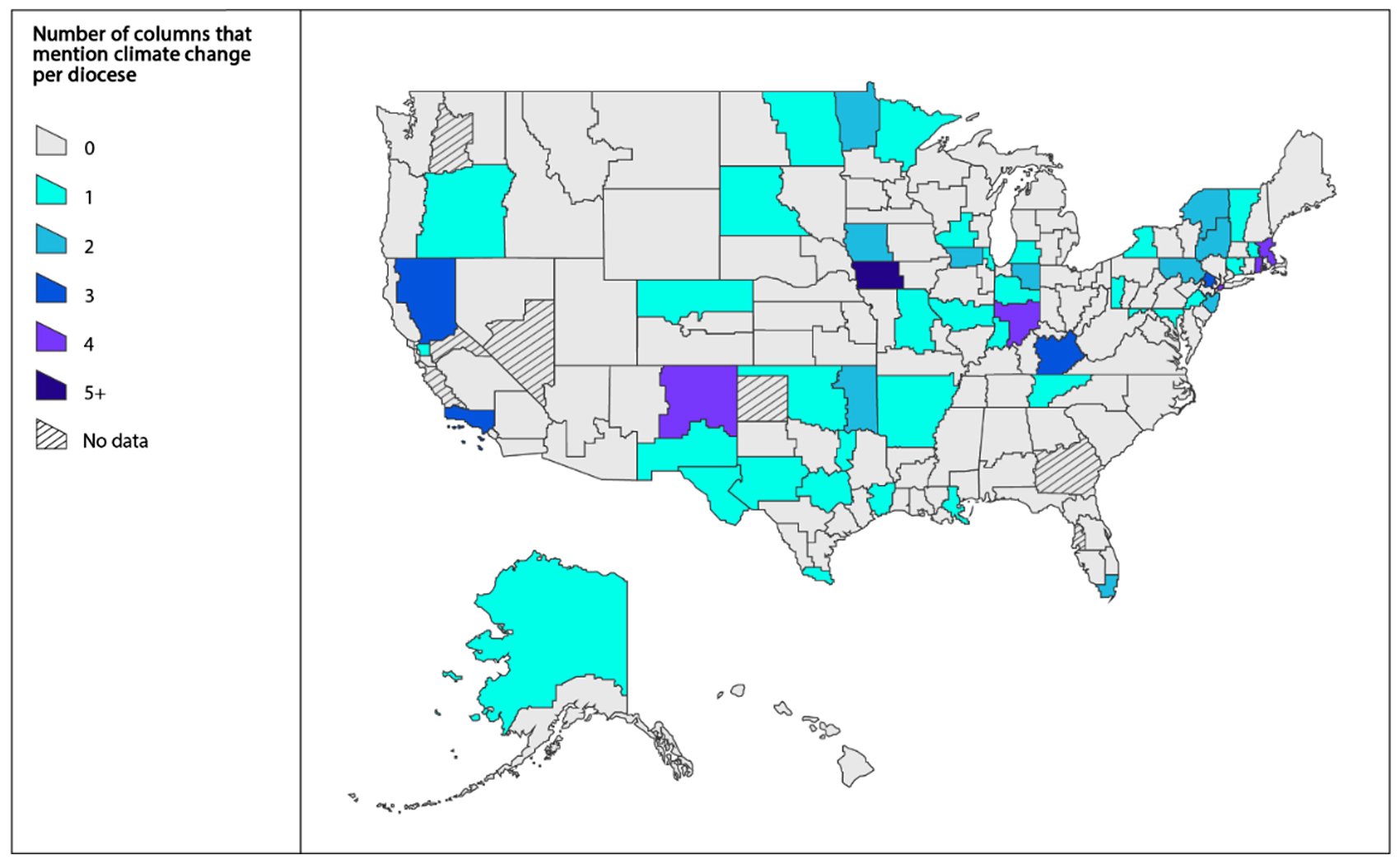 Additionally, 29 columns do not clearly convey the bishop’s personal view about the teaching. Since silence can be a form of climate change denial, readers could interpret their bishop’s silence as disagreement — and license for dissent.

When the bishops did mention climate change, they downplayed the parts of “Laudato Si’” that conflict with a conservative political identity or ideology.

Because U.S. political conservatives have a history of denying, ignoring and sowing doubt about climate change, it’s reasonable to assume that many bishops — who are recognized as becoming increasingly aligned with the Republican Party politically — may have experienced tension between their political ideology and their duty to communicate church climate change teaching. 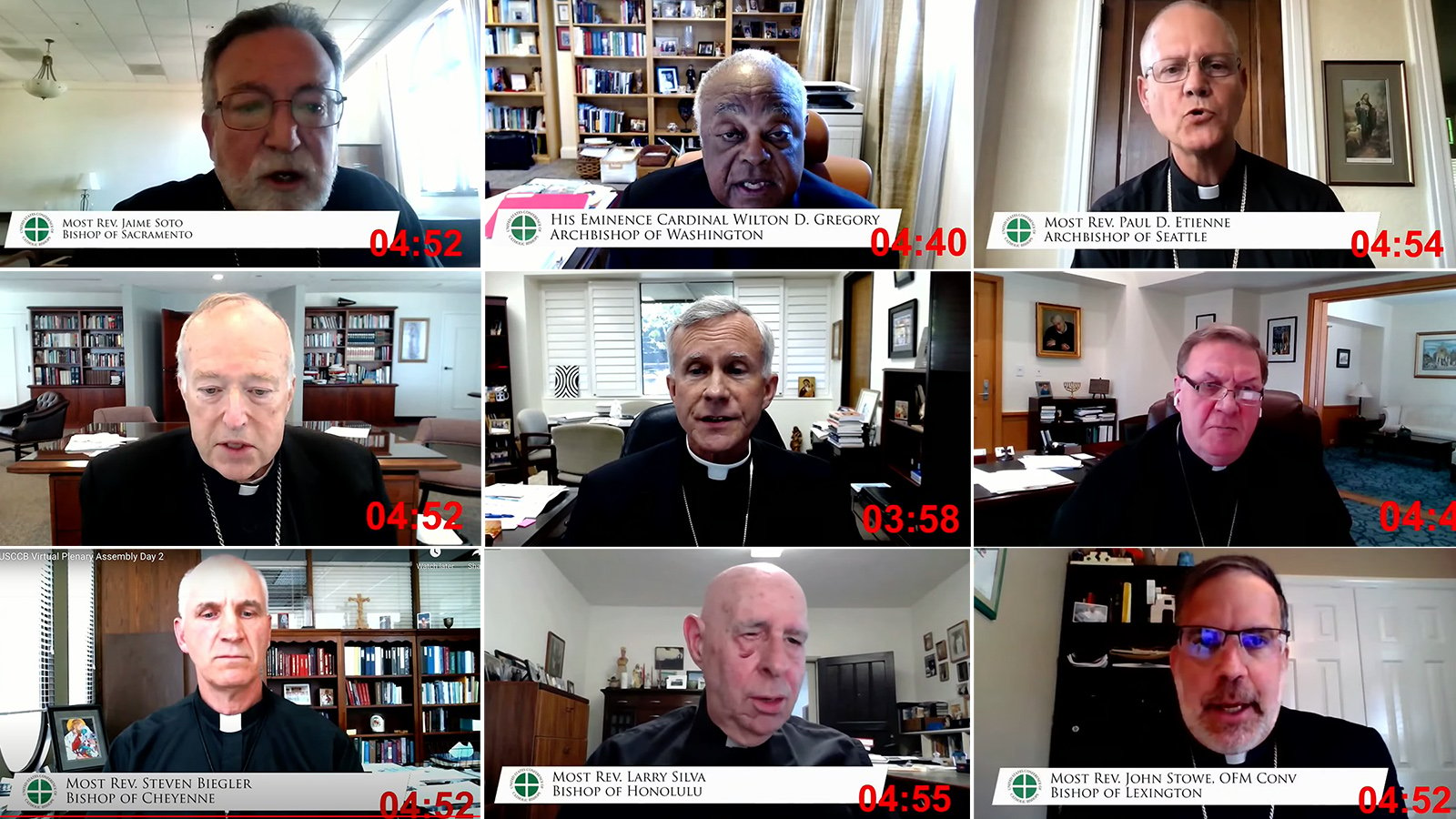 The bishops, after all, fall into other demographics besides being faith leaders: They are by and large older, white Catholics. In 2016, 47% of U.S. bishops who responded to a survey said the conservative Fox News Channel was their primary source of cable news.

In “Laudato Si’,” Francis approvingly cited scholarly analysis that growth-based, deregulated capitalism is the predominant cause of climate change. The American bishops, however, were nearly silent about the economic causes of climate change. Fifty-four of the 56 columns (96%) that do discuss climate change as real or happening fail to describe its economic roots — a phenomenon known as “ideological denialism.”

Pope Francis is silhouetted during a private audience at the Vatican on Dec. 14, 2019. (Yara Nardi/Pool photo via AP)

Bishops’ relative silence on environmental politics is especially notable since they were not silent in their columns about politics around other social issues, such as abortion, that show up only rarely in “Laudato Si’.” While Francis mentioned climate change 24 times and abortion only once, the bishops mentioned both issues with equal frequency when discussing the encyclical.

Our findings do not definitively show that U.S. Catholic bishops’ conservatism was the primary cause of their silence on climate change or skewed teachings around “Laudato Si’.” Additionally, individual bishops may have addressed climate change in their dioceses in ways other than writing columns.

Nevertheless, our data found that as group, U.S. Catholic bishops were silent, denialist and biased about climate change in their official diocesan publications around “Laudato Si’.” We especially found them to be so in ways that correlate with conservative political identity.

RELATED: Pope should send Greta Thunberg to COP26 in his place

Our findings raise questions about whether U.S. Catholic bishops will embrace the Vatican’s new Laudato Si’ Action Platform. Our findings also suggest the U.S. bishops are squandering opportunities to connect with youth and young adults who as a demographic prioritize climate change and are increasingly less affiliated with religion, including Catholicism.

Bishops’ silence on climate policy raises serious questions about how many U.S. bishops will support Vatican advocacy for an international climate agreement at the 2021 U.N. Climate Change Conference, which begins Nov. 1.

The U.S. Catholic Church has unprecedented capacity to help avoid climate catastrophe. It also has a responsibility to address the climate emergency as an essential part of its mission. To realize this potential and fidelity, however, individual U.S. bishops must fulfill their duty to teach the fullness of faith that includes church teaching on climate change.

(Daniel R. DiLeo is an associate professor and director of the Justice and Peace Studies Program at Creighton University. Sabrina Danielsen is assistant professor of sociology at Creighton. Emily E. Burke is a doctoral student in the joint Sociology and Community & Environmental Sociology Program at the University of Wisconsin-Madison. This essay is adapted from their article published in Environmental Research Letters with support from Creighton and the Louisville Institute. The views expressed in this commentary do not necessarily reflect those of Religion News Service.)