[Episcopal News Service] Delegates to the Diocese of Florida’s Nov. 19 bishop coadjutor election have filed an official objection to the election procedures, describing the election as “fundamentally unfair” several months after the first attempt at an election was voided due to a similar objection.

The latest objection also alleges a material error, disparate treatment of clergy, voter disenfranchisement and a rules violation in the most recent election, in which the Rev. Charlie Holt was elected bishop coadjutor for a second time. The diocese shared the five-page letter, dated Nov. 28, in an email on Nov. 30.

Under churchwide canons, an election objection must be submitted by at least 10% of the voters – in this case, 25. The letter shared by the diocese includes the signatures of 29 clergy and lay delegates. 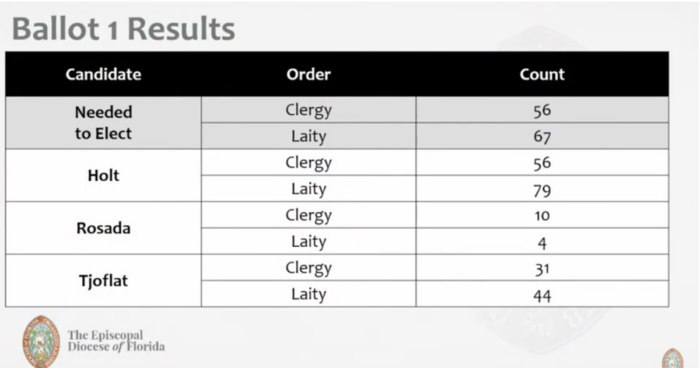 The results of the Nov. 19, 2022, bishop coadjutor election from the Diocese of Florida.

Much of the letter repeats complaints that a group of delegates and parishioners sent to the diocese in October, urging the postponement of the second election due to disputes over how the diocese determined voter eligibility. In that letter, delegates claimed that some clergy who wished to vote were unfairly deemed to not be canonically resident, and that some parishes unfairly lost lay delegates due to updated attendance numbers.

The Nov. 28 objection also claims that there were discrepancies in the November election itself. Diocesan officials announced that Holt had won on the first ballot with the minimum number of votes needed in the clergy order. The objection claims that when the diocese posted the list of delegates present at the electing convention, it contained the name of at least one clergy member who had not registered and did not attend the convention. The objecting delegates noted that a difference of one clergy vote could have changed the outcome of the election.

After the original vote in May, a group of delegates filed the first objection with similar procedural complaints, primarily focused on the diocese’s last-minute decision to allow remote voting for clergy, which changed the number required for a quorum. The Court of Review sided with the objectors, saying that “the irregularities in the convention process itself cast a shadow over the legitimacy of the election.” Holt then withdrew his acceptance of the election, forcing retiring Bishop John Howard to call another electing convention.

In their email sharing the objection to the November election, the diocese’s standing committee and chancellor said they would “respond to the objection letter soon” and that they had submitted it to the office of Presiding Bishop Michael Curry, as required by church canons. After Curry receives the objection, he will submit the complaint to the churchwide Court of Review, which then has 30 days to investigate and write a report. Church canons do not specify a time period in which the presiding bishop must submit the complaint to the court after receiving it.

Once complete, the Court of Review’s report is sent to all diocesan standing committees and bishops with jurisdiction. If a majority of both groups issue consent within 120 days, the bishop-elect can then be consecrated.

In almost all cases, the consent process is a formality, but Holt’s election has faced a separate challenge in that area. The May election came under fire from some Episcopalians inside and outside the diocese who criticized Holt’s statements on race and sexuality, saying they were insulting to LGBTQ+ and Black people, and his personal objection to same-sex marriage. Some wrote to their bishops and standing committees to encourage them not to consent to the election result. Because that election was nullified, it never reached the consent stage.

– Egan Millard is an assistant editor and reporter for Episcopal News Service. He can be reached at emillard@episcopalchurch.org.